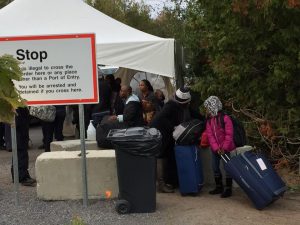 May 3, 2019, OTTAWA, ON – Hon. Michelle Rempel, Conservative Shadow Minister for Immigration, Refugees, and Citizenship, and Pierre Paul-Hus, Shadow Minister for Public Safety, Border Security, and Emergency Preparedness, issued the following joint statement following a comprehensive press conference which outlined next steps for Conservatives on the immigration file, including policy and principles by which an Andrew Scheer government would govern:

“The Conservatives’ Pathways to Canada national consultation tour on improving our immigration system has concluded and we heard clearly from Canadians that they want the system to be fair and orderly and for Canada to remain a safe and welcoming place for the world’s most vulnerable.

“We also heard a number of serious concerns around service standards, the temporary foreign worker program, delays and backlogs for those fleeing violence and persecution, and ballooning costs associated with people who enter Canada illegally from the United States.

“After spending the last three years demonizing and personally attacking Canadians for raising these concerns, the reality is that Justin Trudeau has effectively broken the immigration system.

“For the remainder of this session, Conservatives will focus on improving services for newcomers, cracking down on crooked immigration consultants, demanding answers on the lawsuit over visa centres, and solving the ongoing illegal border crossing crisis.

“Conservatives will continue to work to restore order, fairness, compassion, and integrity to our immigration system, so that Canadians can continue to have confidence in both the system and in Canada’s reputation as a welcoming place for newcomers seeking a better life.”