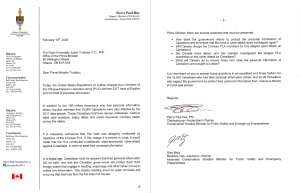 Today, the United States Department of Justice charged four members of the Chinese People’s Liberation Army (PLA) with the 2017 hack of Equifax and the theft of personal information.

In addition to the 150 million Americans who had personal information stolen, Equifax admitted that 19,000 Canadians were also affected by the 2017 data breach. These Canadians had their names, addresses, credit or debit card numbers, expiry dates and social insurance numbers stolen during this attack.

It is extremely worrisome that this hack was allegedly conducted by members of the Chinese PLA. If this charge it is proven in court, it would mean that the PLA conducted a deliberate, state-sponsored, cyber-attack against Canadians, in order to steal their personal information.

In a digital age, Canadians must be assured that their personal information will be safe, and that the Canadian government will protect them from foreign actors that engage in hacking, espionage and other cyber-crimes to collect this information. This means cracking down on cyber criminals and ensuring that that they face the full extent of the law.

Prime Minister, there are several questions that must be answered:
• How does the government intend to protect the personal information of Canadians and to ensure that this kind of cyber-attack does not happen again?
• Will Canada charge the Chinese PLA members for this alleged cyber-attack on Canadians?
• Did Canada know about, and has Canada investigated the alleged PLA connection to this cyber-attack on Canadians?
• What will Canada do to ensure those who stole the personal information of Canadians are brought to justice?